The Base Closure and Realignment (BRAC) Commission voted today to take Groton’s submarine base off the list.

Commission Votes To Save Sub Base (Hartford Courant)

The base-closing commission today voted 7-1 to keep the Naval Submarine Base in Groton open. The panel overwhelming rejected the May 13 Pentagon recommendation to shut the 90-year-old facility — a move it said would save $1.6 billion. Commission members, meeting in the Arlington, Va. hotel, made it clear they did not buy that argument — or any others. “It would be a tragic mistake, a tragic loss to this nation,” Commission Chairman Anthony J. Principi said before the vote.

Connecticut officials reacted with joy. “Yahoo!” said U.S. Senator Joe Lieberman, D-Conn. “Submarine base New London lives, and I think that it will live forever.” Gov. M. Jodi Rell said she was in tears as she listened to the decision while in her car on the way to New London. The governor said she had someone in her office hold a phone to a television set so she could hear the vote. “We did it! We did it!” Rell said.

For previous OTB posts on the BRAC process, see our BRAC category archives. 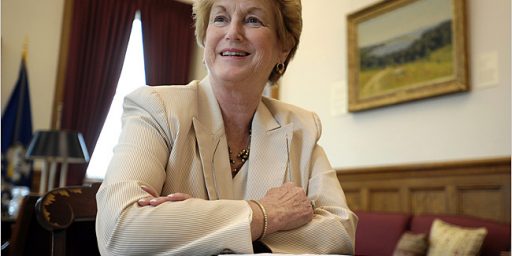