The saga of accused Wikileaks conspirator Bradley Manning continues to get uglier, with the military acknowledging that he was forced to spend the day naked for, well, no apparent reason. 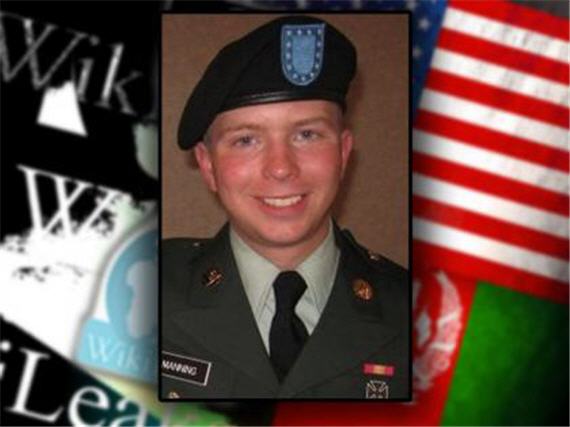 The saga of accused Wikileaks conspirator Bradley Manning continues to get uglier, with the military acknowledging that he was forced to spend the day naked for, well, no apparent reason.

A lawyer for Pfc. Bradley Manning, the Army intelligence analyst accused of leaking secret government files to WikiLeaks, has complained that his client was stripped and left naked in his cell for seven hours on Wednesday.

The conditions of Private Manning’s confinement at the Marine brig in Quantico, Va., have drawn criticism in recent months from supporters and his lawyer, David E. Coombs.

The soldier’s clothing was returned to him Thursday morning, after he was required to stand naked outside his cell during an inspection, Mr. Coombs said in a posting on his Web site. “This type of degrading treatment is inexcusable and without justification,” Mr. Coombs wrote. “It is an embarrassment to our military justice system and should not be tolerated. Pfc. Manning has been told that the same thing will happen to him again tonight. No other detainee at the brig is forced to endure this type of isolation and humiliation.”

First Lt. Brian Villiard, a Marine spokesman, said a brig duty supervisor had ordered Private Manning’s clothing taken from him. He said that the step was “not punitive” and that it was in accordance with brig rules, but he said that he was not allowed to say more. “It would be inappropriate for me to explain it,” Lieutenant Villiard said. “I can confirm that it did happen, but I can’t explain it to you without violating the detainee’s privacy.”

Private Manning is being held as a maximum security detainee under a special set of restrictions intended to prevent self-injury, even though supporters say there is no evidence that he is suicidal.

During an appearance on MSNBC earlier on Thursday, Geoffrey Morrell, the Pentagon press secretary, attributed the general conditions of Private Manning’s confinement to “the seriousness of the charges he’s facing, the potential length of sentence, the national security implications” and to protect him from potential harm.

Also, earlier on Thursday, one of Private Manning’s friends, David House, said in a conference call with reporters that he had visited the soldier the previous weekend and that his mental condition was severely deteriorating as a result of being confined to his cell 23 hours a day, with one hour to exercise in an empty room, and largely isolated from human contact. But Mr. House said that Private Manning did not seem suicidal and contended that he was being pressured to cooperate.

The “suicide watch” argument has long since worn thin. And the fact that he’s been held in solitary confinement for months on end, a condition that many of us contend amounts to torture, seems to be the chief rationale for the suicide watch.

This treatment would be an international scandal if done to an accused terrorist at Gitmo or to a convicted criminal on death row. Manning was subjected to it for months before any charges were filed against him.

I’m in no way sympathetic to Manning, much less Julian Assange and the Wikileaks gang. But this treatment by the American government is simply shameful. And both admitting to doing it but refusing to explain why–under claim of concern for Manning’s privacy no less–should embarrass anyone wearing the uniform of a United States Marine.

UPDATE:  Via Glenn Greenwald I see that Savage has a follow-up (“Soldier in Leaks Case Will Be Made to Sleep Naked Nightly“):

Pfc. Bradley E. Manning, the Army intelligence analyst accused of leaking government files to WikiLeaks, will be stripped of his clothing every night as a “precautionary measure” to prevent him from injuring himself, an official at the Marine brig at Quantico, Va., said on Friday.

Private Manning will also be required to stand outside his cell naked during a morning inspection, after which his clothing will be returned to him, said a Marine spokesman, First Lt. Brian Villiard. “Because of recent circumstances, the underwear was taken away from him as a precaution to ensure that he did not injure himself,” Lieutenant Villiard said. “The brig commander has a duty and responsibility to ensure the safety and well-being of the detainees and to make sure that they are able to stand trial.”

Private Manning is a maximum-security detainee under “prevention of injury watch,” a special set of restrictions — a step his supporters, who contend that he is not suicidal, have said is unjustified. He has not been elevated to the more restrictive “suicide watch” conditions.

Lieutenant Villiard said the new rule on clothing, which would continue indefinitely, had been imposed by the brig commander, Chief Warrant Officer Denise Barnes. He said that he was not allowed to explain what prompted it “because to discuss the details would be a violation of Manning’s privacy.”

I’d hate to see what additional restrictions are applied under full-blown suicide watch, if possession of undergarments is deemed too risky in the lower status. And, again, the idea that they’re simultaneously concerned with Manning’s privacy and making him spend the night naked does not compute.

This is a total disgrace. It shouldn’t be happening in this country. You can’t be unaware of this, Mr. President. Silence gives consent.

Hell, Obama promised to close Gitmo because he was embarrassed that we were doing this kind of thing to accused terrorists. But he’s allowing it to happen to an American soldier under his command? 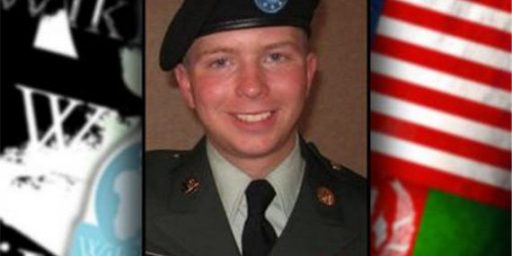 The Shameful Treatment Of Bradley Manning