Paul Farhi reflects on a growing trend in cable news in which anything and everything is hyped with a banner proclaiming instant freshness:

President Bush’s latest news conference? CNN labels it a “Developing Story.” A car bombing in Baghdad? The banner on MSNBC reads, “Breaking News.” A blown transformer in New York City? Fox News Channel is on it, with a graphic that announces, “Very Latest.”

It makes sense on a certain level, as it’s difficult to catch people’s attention in a world where everyone is flooded with information. Still, it’s annoying.

The folks at the television news networks are pikers, though, compared to their radio brethren. The DC area’s most popular station, WTOP, offers nothing but news, traffic, and weather. It’s fine for catching traffic reports (every ten minutes on the 8’s) but rather aggravating for an extended period. Stories that are hours old are still treated as breaking news and delivered with teasers. More than twenty minutes of that is mind numbing, especially once you’ve heard the punchline. 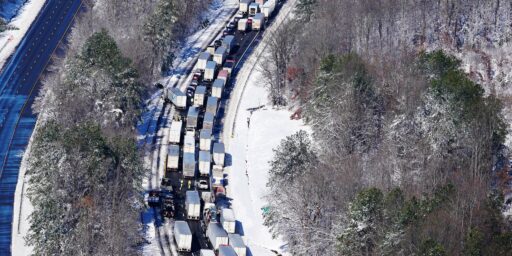 I-95 Snow Nightmare Over