The venerable Brooks Brothers is getting into the college apparel business:

Preppies (of the male variety) can now buy their blazers and their college polo shirts in one shopping trip. Brooks Brothers has announced that, for the first time in its nearly 200-year history, it will sell college apparel, Bloomberg reported. Clothing will be available only from 15 colleges, and this won’t be the place to buy college logo boxers. Only sweaters, dress and polo shirts and ties will be sold. “The key for us is re-establishing our connection with what we call the college community — students, faculty and alumni,” Karl Haller, vice president of strategy and business development for Brooks Brothers told Bloomberg. “We have a pretty well-educated customer and there’s a built-in opportunity with alumni who are already our customer base.” The 15 colleges: Boston College; the U.S. Naval Academy, Auburn, Cornell, Harvard, New York, Ohio State, Princeton, Stanford, and Vanderbilt Universities and the Universities of Alabama, Georgia, Notre Dame and Virginia.

As an Alabama grad who’s a fan of Brooks Brothers polos and sweaters, I’m part of the target demo. But the selection of schools is interesting.

Alabama, Auburn, Georgia, and Vandy are all SEC schools but that the eight other schools in the conference aren’t included. Florida, which has easily the largest enrollment in the conference, is excluded while Vandy, easily the smallest, is included. All of the SEC schools have rabid, wealthy alumni networks who would buy clothing. Even more oddly, Ivies Harvard, Princeton, and Cornell are included but Yale and Dartmouth are excluded (along with Brown, Columbia, and UPenn). And how can you have Navy but not Army? Or Ohio State and not Michigan?

Presumably, IMG Worldwide, who is Brooks Brothers’ partner in the enterprise, doesn’t have a deal with every big school. But the omissions are glaring. 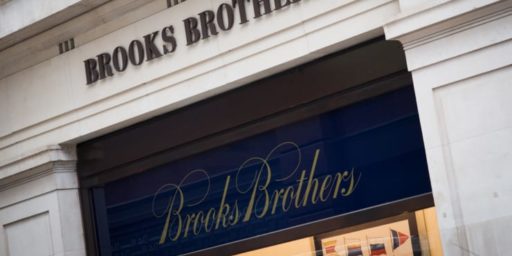