Today was a big day in Nampa [Pop. 60,000 or so], Idaho. President Bush was here and gave a speech this morning in Nampa’s Idaho Center. He has been in Idaho vacationing at a mountain resort about 100 miles north of the Boise Valley. On his way back we were honored with a public event of Pres. Bush’s first visit to Idaho. Well, really no reason to come prior. Only four electoral votes and solid Republican.

Rumors started to fly last week. I was beside myself and started calling about tickets. Nothing except that most of the tickets would go to Idaho National Guard and families. Idaho has the second largest National Guard contingent in Iraq. Even tried to butter up the Receptionist at my Vet. Clinic. Her husband is in Kirkuk.

“No way, I’m going to be first in line.” Gloomy weekend.

“No, no, no.” The last no, “I said I really wanted to see him being Retired Military.”

“You are? I’ll call you back.” Two hours later got a call. “You have to pick the ticket up now.” I was in Downtown Boise in forty-five minutes flat.

Event was at 11:15 AM about fifteen minutes from my house. I though I’d get there early, so I left at 7:30 before the doors opened at 8:00. Huge lines already? People had been camped out since 4:00 AM. Got in line. Actually kind of fun. Every one was excited. Most in uniform. We talked, laughed and time flew by. There was security, but I expected more. The same level you have to go through at the County Court House to pay your Property Tax. No line there. Anyway seating was first come, first served once inside. Free to move about. Somebody was watching I suppose. I got a seat. Saw one closer. Moved up, and up. Finally ended up fairly close. Third row in A-19

Pres. Bush is much more of a dynamic speaker in real life that on TV. When he speaks jointly with Tony Blair doesn’t come off so good. Essentially the same speech. Tailored a bit to Idaho and
the National guard. Afterwards he came down, greeted, shook hands, and signed autographs (one a Sailor’s hat). He seemed very personable and looked like he was enjoying himself. Why not? He was in Bush Country.

Second picture is some of the troops on stage. I can’t take pictures and the ones of the President on stage were crummy. And the one of the First Lady. Better ones on the web anyway. 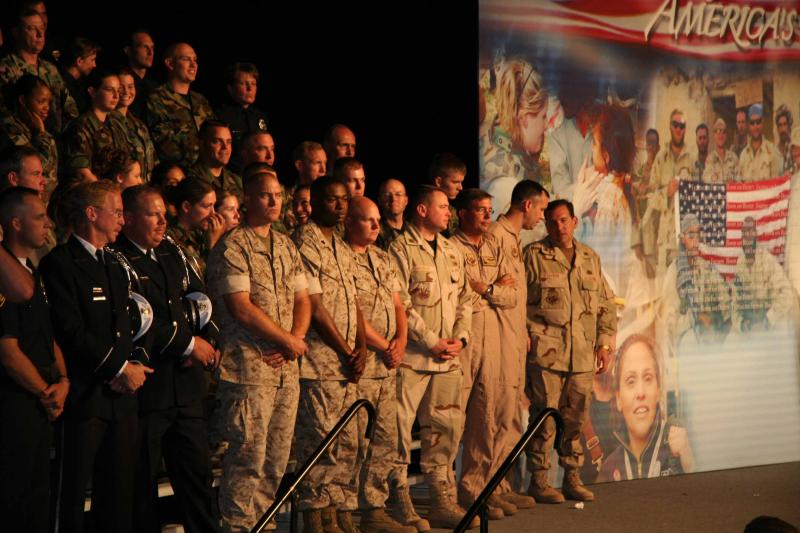 The only other President I’ve seen was Pres. Truman in 1948. In the second grade at the time. We had to join hands two-by-two and walk about five blocks to the train depot where he spoke from a platform on the rear car. Then much later I was stationed at the Pentagon and Walter Reed. Nixon at the time, but I never saw him.

He should have gone to the Navy Officers” Club for lunch to watch the topless go-go girls. I don’t suppose they do that there now. LOL

Protestors? Yea, about fifty at the main gate when I arrived. I counted only seven there when I drove out and two news vans with cameras interviewing them. I’ll have to watch the evening local news. Their signs were too small and wordy to read and drive. I should have taken my “Support PAWS” sign.

PS – I forgot to tell you that I also saw Teddy Kennedy. He came to Idaho State University when I was there to campaign for JFK. On FOX tonight they made a reference to his remarks of Bush’s Idaho visit. “Bush has no plan.” PLAN? A Republican CAN drive accross a bridge drunk and not fall in. Oh, maybe the plan then would have been to take a taxi.