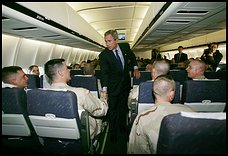 It had been a pretty glum day for Spec. Brian Parker, who along with the other members of his National Guard unit said goodbye to their families and departed on a charter flight for a long-term stint in Iraq. But then, on a refueling stop here, a familiar figure boarded the plane. “We were down when we left our families,” Parker said, giving a thumbs down. “But then we heard Air Force One was here. It’s a good morale boost.”

President Bush, after a campaign appearance in Bangor, held his plane on the tarmac when he heard an MD-11 carrying 292 Army reservists and National Guard members was about to refuel here. For the troops, grimly heading toward an 18-to-24-month assignment in Iraq, it was a welcome lift. For Bush, who has been accusing his Democratic presidential opponent, Sen. John F. Kerry, of demoralizing the troops in Iraq by criticizing the war effort, it was a chance to demonstrate his devotion to the troops. “May God bless you all,” the commander in chief said over the plane’s public address system. “May God keep you safe.” As he worked his way up and down the plane’s aisles, posing for photographs, signing autographs and shaking hands, the happily surprised troops called out to him. “That’s my president, hooah!” shouted Sgt. Wanda Dabbs, 22, a member of the 230th Area Support Group, a Guard unit from Tennessee. Others seconded her cheer.

Bush’s impromptu visit with the departing soldiers came with some risk. It could remind the American public that more and more reservists and Guard members are being removed from their workplaces and sent on dangerous assignments in an increasingly bloody Iraq. But the president’s aides saw an opportunity to underscore the point Bush had made at his campaign rally here, in front of an airport hangar and an enormous American flag suspended by two cranes. “You cannot lead the war on terror if you wilt when times are tough,” Bush said of Kerry. “What kind of message does it send our troops, who are risking their lives and who see firsthand the mission is hard but know the mission is critical to our success?”

Whatever their concerns about the dangers ahead, the troops on the plane were joyous when their commander in chief appeared. “I can guarantee you right now this is the best thing that ever happened to me in my lifetime,” said Sgt. 1st Class Bill Freeman of the 230th, a Goodyear Tires worker in Tennessee and a Bush supporter. Soldiers interviewed on the plane were stoic about their mission. Spec. Eddie Latham, a factory worker, called Bush “a great leader” but added: “I’m nervous to go to Iraq.” The charter plane carrying the troops, flown by World Airways, was directed to increase its speed en route to Bangor to catch Bush. “They pushed the gas pedal a little bit,” White House Chief of Staff Andrew H. Card Jr. said. Most of the soldiers, dressed in desert camouflage fatigues, had cameras ready to take snapshots of Bush. The president, who donned a tie and suit jacket after his political rally, offered gentle smiles and words such as “I’m proud of you” and “thank you.”

Sgt. 1st Class Bobby Dailey, a FedEx worker normally, was asked if the boisterous reception meant these were all Bush supporters. “We’re commander-in-chief supporters,” he clarified, and pointed out: “It ain’t every day you land somewhere and the president gets on your plane.” As it happens, the troops were given absentee ballots just before they departed, and there were still some undecided voters on board as Bush worked the crowd. “I’m still balancing the issues. I’m not sure,” said David Spence of the 230th, a machinist, when asked about the election. “I’d like to hear what he has to say.” But 2nd Lt. Roxana Pagan-Sanchez, of the 30th, pronounced herself solidly with Bush after she got to meet the president. “He told me he’s proud of me,” said the mother of a 12-year-old she left behind in Raleigh, N.C. “I’m so proud of him.” Moments later, the president departed for Washington, and the troops continued their journey to Iraq.

Bush is very good at these impromptu meetings– with the Ground Zero rescue crews right after 9/11 and with soldiers in Iraq on Thanksgiving come readily to mind, in addition to this episode–and it seems to do wonders for morale, at least in the short term. An announced presidential visit wouldn’t have the same effect, since it would entail days of painting rocks and otherwise “getting things ready.”