Jerry Brown tells the US Supreme Court to go to hell. 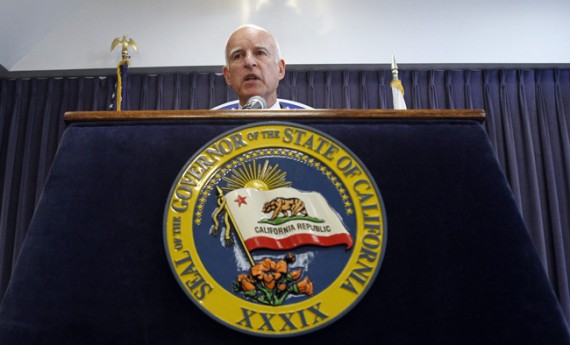 The Supreme Court has ordered California to release thousands of inmates to assuage overcrowding. Jerry Brown has told them to go to hell.

The Atlantic (“California’s Prison Crisis is Now a Constitutional Crisis“):

Something extraordinary is happening in California. A long-running story about the atrocious conditions in the state’s prisons has expanded in the past two weeks into a story about state sovereignty, the doctrine of interposition, and about the ability and will of the nation’s judges to oversee the enforcement of the lawful orders they issue. The California prison crisis, in other words, has become an existential crisis over federal and state power.

California Gov. Jerry Brown is openly defying a series of federal orders requiring state officials to reduce California’s prison population to comply with the requirements of the Eighth Amendment. Instead of obeying these orders, which were directly approved by the Supreme Court, the governor instead has made a series of false and inflamatory statements about the law, the courts, the inmate problem and California’s efforts so far to solve it.

In May 2011, in a decision authored by Justice Anthony Kennedy, a native Californian, the Court broadly upheld the 2009 ruling. There was little ambiguity from the Court’s majority: the state had until June 2013 to comply. In October 2011, California began to empty its prisons. “Thousands of inmates either serving prison terms or parole revocation terms for ‘non-serious, non-violent and non-registerable sex crimes’ were shifted to county jails,” the judicial panelists noted.

But then, California’s progress stopped well short of the 137.5 percent benchmark the courts had ordered. Why? Because of political pressure generated by the shifting of the inmates from state to county facilities.

Over and over, the judicial panel gave state officials time and opportunities to fix the problem. Over and over, the prisoners’ lawyers complained about the pace of the progress. Over and over, California refused to commit to a plan that would bring the prisons into compliance by June 2013, or even December 2013. And then, in early January of this year, the state simply gave up trying.

On January 8, 2013, Gov. Brown announced that as of July 2013 he would no longer use whatever “emergency powers” he has as chief executive to comply with the order. He announced that “prison crowding no longer poses safety risks to prison staff or inmates, nor does it inhibit the delivery of timely and effective health care services to inmates.” California’s governor, in effect, unilaterally declared an end to his state’s constitutional obligation to end the prison emergency.

This is a fascinating case. Clearly, the law is on the side of the prisoners, who have already won—repeatedly—in federal court. There’s simply no question that 1) the federal judiciary has authority to order what they’ve ordered and that 2) federal judicial rulings trump the desires of the governor of California.

It’s precisely situations like this that require having an independent judiciary. It’s hard to think of a class less likely to generate sympathy than convicted felons forced to share tighter-than-ideal quarters. But we have a Constitutional protection against the infliction of cruel and unusual punishments and it’s the courts who decide what that means.

Yet, it’s not obvious who it is that’s gonna make Jerry Brown comply. The courts have no army or police. For enforcement, then, they’re reliant on the executive branch.

Can anyone imagine President Obama’s Justice Department intervening here? Or, taking a page out of President Eisenhower’s book, federalizing the California National Guard and forcibly enforcing this court order? One that calls for convicted felons to be released from prison into the general population before the completion of their sentence? I can’t.