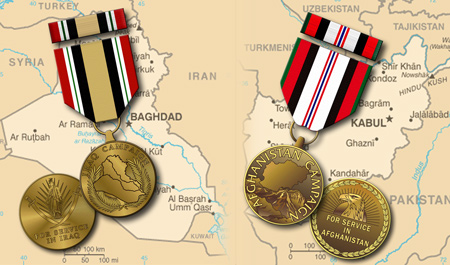 The Department of Defense announced yesterday that campaign stars are authorized for wear on the Afghanistan Campaign Medal (ACM) and Iraq Campaign Medal (ICM). That’s no real surprise; the wars have been going on for quite some time and the practice is typical.

I was initially authorized two campaign stars for my Southwest Asia Service Medal, one each for Desert Shield and Desert Storm. Nearly two years later — after I was already out of the Army — they decided that I had actually participated in a third “campaign,” the postwar ceasefire period.

The “campaign phases” for both wars are somewhat interesting:

For Iraq, the phases are more surreal:

One would think “national resolution” would be a prerequisite to “governance.”