Can Democrats Win the House but Not the Senate?

Almost all the experts, including Democratic partisans, concede that the Senate will almost certainly remain Republican after the 2006 elections but think the House of Representatives very much in play. Indeed, that has been my operating assumption as well.

Jay Cost makes an interesting point that I have not seen elsewhere: Since Senators have been elected by the people rather than appointed by state legislatures following the 17th Amendment, the House has never switched parties without the Senate also switching, although the Senate has switched an additional four times without a switch in the House.

Is this simply historical coincidence, or is a causal logic driving the correlation? A pattern that holds over 46 observations without exception is probably not random. Most important, however, is that this sort of pattern coheres with what we already know about Senate and House elections: namely, House elections are much less susceptible to national trends than Senate elections.

Contrary to the original intention of the Framers, the House is more insulated from the public than the President or the Senate. This is not because the House has altered its relationship with the public. It is because other branches have evolved while the House has remained the same. By original design, the Senate and the President were intended to be largely non-democratic institutions. However, by 1828 the President had become a fully democratic officer. The Senate became directly democratic in 1914. Elections for both evolved into kinds of referenda on the state of the union (in presidential elections, the contests are indeed referenda; in Senate elections, they are more like effective ones, thanks to the reduced incumbency advantage). This never happened with House elections. The House’s relationship with the public has thus not changed much since the founding. It has never been a national assembly like the House of Commons. It has always been the meeting place of the representatives of different parts of the nation. It is democratic, but it remains democratic in the way that the Framers envisioned democracy in America.

This is exactly right, counterintuitive as it might seem. Remember, the man who coined the phrase “All politics is local” was Speaker of the House Tip O’Neill. Senate races are increasingly national, with the parties getting involved in recruiting and financing candidates. House races, by contrast, are still largely based upon local idosyncracies and the incumbent’s reputation for constituent service.

Of course, one might respond, this argument could just as easily predict that both the House and the Senate will flip this year. The error that pundits are making, according to this line, is not with the House but with the Senate. Both are vulnerable. I do not find this compelling. One of the reasons pundits are so prone to write off the Senate is that they know more about the individual elections (this, by the way, is in keeping with senators’ reduced incumbency advantage – individual senators are better known). They have a better sense of the electoral landscape, and therefore can appreciate that a net of six is prohibitively difficult. However, pundits know less of the specifics of House contests; thus, the House seems more promising. They cannot name the seats the GOP would have to lose to lose the House. If they could, they would find themselves naming many members most think are secure. A switch of the House still seems plausible, in other words, only because details are lacking.

This is almost certainly true. While American politics is not my specialty, it was a secondary field of my doctoral study and something that I follow closely. Yet, while there are very few Senators, indeed, that fly under my radar screen the overwhelming majority of House Members do. Likewise, close observers of politics have at least some idea of the political climate of states simply by their presidential and senatorial voting patterns. Few of us know much about more than a handful of the 435 House Districts. 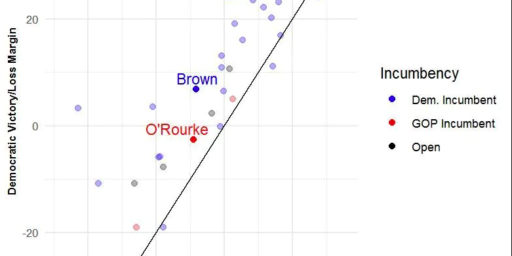