Canada is beginning to recognize the depth of Communist China’s espionage in the Great White North. The Canadian Broadcasting Corporation (CBC) mostly rehashed the accounts of Chen Yonglin and Hao Fengjun regarding Communist overseas spy networks, but added that Hao “says Canada has more spies operating in it than any other country.” Jillian Ye, a resident of Scarborough, Ontario, certainly believes that, after seeing one of the documents Hao smuggled out with him “detailed Ye’s plans to start a communications company” (Epoch Times). No fewer than four members of the opposition Conservative Party, including foreign affairs critic Stockwell Day, deputy leader Peter MacKay (Hansard) Jason Kenney (Hansard) and Helena Guergis (Hansard), pressed the governing Liberals on this issue in Parliament. Meanwhile, the editors of the British Columbian Asian-Pacific Post demanded to know why the Canadian firm Nortel is helping the cadres’ crackdown on cyberdissidents.

From Hansard (via Newsbeat 1)

Mr. Stockwell Day (Okanagan–Coquihalla, CPC): Mr. Speaker, a few months ago, when we raised the possibility of Chinese espionage in Canada, the government did not seem concerned in the least. Now a second Chinese defector is claiming that there is an operational network on Canadian soil.

Has the government called on Chinese officials here in Canada to get a full explanation, yes or no?

Hon. Pierre Pettigrew (Minister of Foreign Affairs, Lib.): Mr. Speaker, we are always in touch with Chinese officials in the capital. We discuss a number of issues relating to the respect for human rights and the right of Canadian citizens to express themselves in the way they want. This is a free country. We will always insist that people are free to do so in this country. This is what we have been expressing to the Chinese officials. [emphasis mine]

Mr. Stockwell Day (Okanagan–Coquihalla, CPC): There was no answer there, Mr. Speaker.

Well, actually – yes, there was. You just have to listen more closely, Stock.

UPDATE
Some amazing things turn up on the net…. 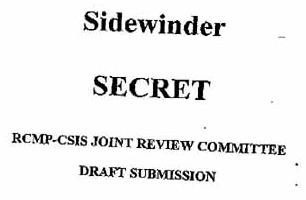 Via Shaken, who has more.