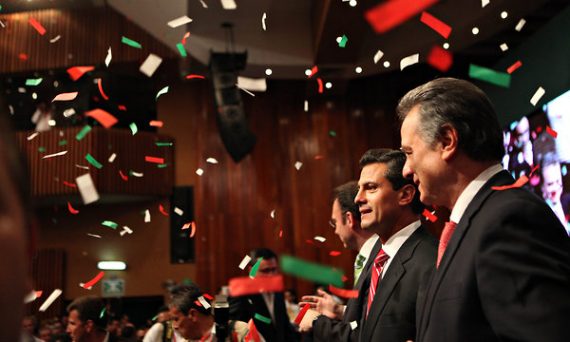 The candidate of the party that had ruled Mexico as a virtual one-party state up until 2000 appears to have ended the PRI’s decade in opposition:

MEXICO CITY — The party that ruled Mexico for decades with an autocratic grip appears to have vaulted back into power after 12 years in opposition, as voters troubled by a bloody drug war and economic malaise gave its presidential candidate, Enrique Peña Nieto, a comfortable victory on Sunday, according to preliminary returns and exit polls.

The victory was a stunning reversal of fortune for the centrist Institutional Revolutionary Party, known as the PRI, which was thought to be crippled after its defeat in the 2000 presidential election ushered in an era of real multiparty democracy here.

Buoyed by a strong machine across several states, by the youthful Mr. Peña Nieto’s capture of the television spotlight and by voters’ unhappiness with the direction of the country, the PRI defeated both the incumbent conservative party and the candidate who nearly beat the conservatives last time.

A “quick count” based on a sampling of returns from across the country, announced by election officials late Sunday night, showed Mr. Peña Nieto with 38 to 39 percent of the vote and a 7-point lead over Andrés Manuel López Obrador, a former Mexico City mayor who lost narrowly in 2006 and is a member of the left-leaning Party of the Democratic Revolution. The conservative candidate, Josefina Vázquez Mota, a former cabinet secretary who sought to become Mexico’s first woman president, was running third with 25 to 26 percent. Earlier in the evening, exit polls released by several news organizations pointed to similar results, though with a somewhat wider lead for Mr. Peña Nieto.

He addressed supporters shortly before midnight, repeatedly saying “Mexico won,” promising to govern openly and with accountability, and trying to knock down any suggestion that he would reach accommodations with criminal groups, as his party has been accused of doing in the past.

“There will be no deals or truce with organized crime,” he said.

Though Mr. Peña Nieto was declared the winner and President Felipe Calderón telephoned to congratulate him, the preliminary results suggested that he had not won an unequivocal mandate, garnering less than half the total votes and trailing in some of the most violence-plagued states.

Ms. Vázquez Mota made a concessionary speech soon after the polls closed. Without mentioning Mr. Peña Nieto directly, she alluded to concerns about the PRI, saying she would continue to fight against “the return of authoritarianism, of corrupt rule, impunity and capitulating to organized crime.”

But Mr. López Obrador said late on Sunday that he would not concede, and would instead wait for complete vote tallies in the coming days. “The final word has not been said,” he told supporters. In 2006, Mr. López Obrador refused for 48 days to accept defeat, and led street demonstrations demanding a full recount.

Mr. Peña Nieto, who has visited Washington and New York several times in the past year to introduce himself to lawmakers and opinion leaders, has promised more efficient, expanded trade with the United States and predicted that relations would be strong. But Washington will be watching closely for any hint of his administration’s easing the pressure on drug traffickers.

In his campaign, he promised to refocus the drug war more on combating the violence afflicting Mexicans, and has hardly mentioned attacking drug trafficking itself or taking down cartel leaders.

That stance might have been meant to distance him from President Felipe Calderón, whose militarized approach to the drug war left many Mexicans uneasy over the heavy civilian toll — more than 50,000 drug war-related deaths in recent years — and eager for a better strategy. Mr. Calderón acknowledged Mr. Peña Nieto’s victory in remarks late Sunday night.

The big question, of course, is whether this will be the PRI of the future, or the PRI of the past. The Mexican people clearly seem to hope it’s the former and not the later.