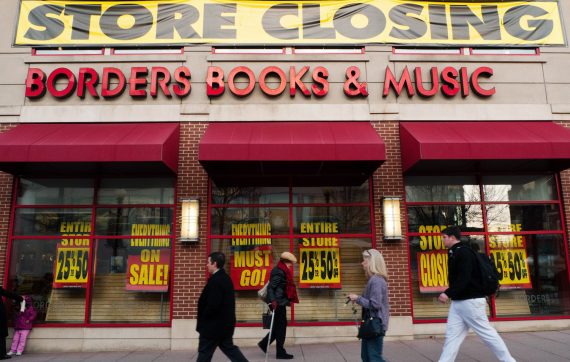 (FILES) This March 4, 2011 file photo shows pedestrians as they pass by a Borders book store with signs announcing that it will be cloing its doors, in Washington, DC. US book chain Borders is on the brink of liquidation after the collapse of a deal with the Najafi investment firm aimed at saving the bankrupt company, the Wall Street Journal reported on July 14, 2011. At the start of this month Borders had designated Najafi as the opening bidder in a looming bankruptcy court action, but that deal has reportedly fallen through because of objections by publishers and landlords. AFP PHOTO/Mandel NGAN (Photo credit should read MANDEL NGAN/AFP/Getty Images)