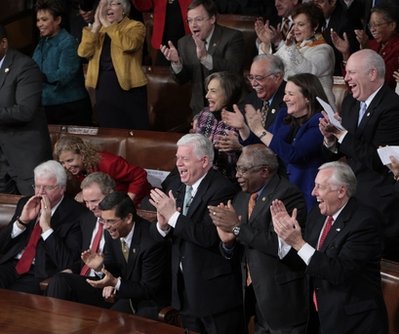 FILE – In this Jan. 27, 2010, file photo Democrats, including, standing from right, House Majority Leader Steny Hoyer of Md., House Majority Whip James Clyburn of S.C., and Rep. John Larson, D-Conn., applaud President Barack Obama’s State of the Union address on Capitol Hill in Washington. During his first State of the Union Obama spoke of a national day of reckoning. “We will rebuild, we will recover, and the United States of America will emerge stronger than before,” he asserted to rousing applause. (AP Photo/Pablo Martinez Monsivais)