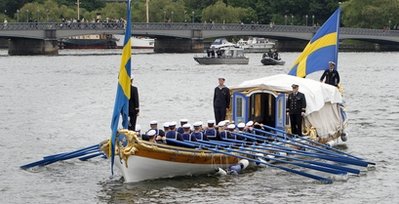 Rowers of the royal sloop ‘Vasaorden’ arrive at the Royal Palace in Stockholm, Sweden, Friday June 18, 2010, during the rehearsal one day ahead of the wedding between Sweden’s Crown Princess Victoria and Daniel Westling. The sloop will take the newly married couple to the Royal Palace after the cortege through Stockholm City that will follow their marriage. (AP Photo/Scanpix/Soeren Andersson) ** SWEDEN OUT **