The Titanic Edition OTB Caption ContestTM is now over.

The Titanic Edition OTB Caption ContestTM is now over. 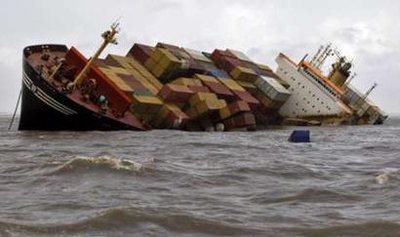 Second: Ole Sarge – When the “Ship of State” lists to “port”, this is what can happen.

Third: Maggie Mama – Who’s the idiot at BP that thought this would be a good way to plug the hole?

Robert W. Armijo – A spokesperson for the Somali pirates quickly denied any involvement.

Alex Knapp – Proof positive that a rising tide does NOT lift all boats.

G.A.Phillips – Federal Aid to the teachers unions has arrived….

Phil Smith – “That’s what you do with a drunken sailor, bitch!”

Leaning to the left causes catastrophe

“Well der Ole, I guess inside a cargo container’s not such a good way to go to da new country?”
“Ya der hey, Sven.”

The USS Tetris was trickier to maneuver than originally thought.