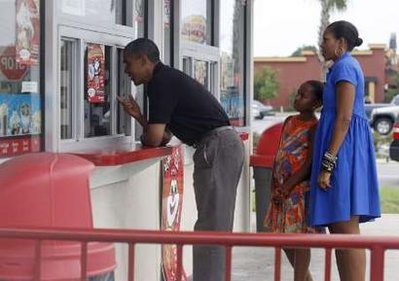 JazzShaw – It’s your shop, but just from a basic marketing perspective, I don’t think Oil Soaked Pelican is a very good idea for a flavor.

Maggie Mama – My wife has a rather large mouth; how many scoops will it take to shut it up?

Michael Hamm – Can I pay for this with Food Stamps?

charles austin – Do you have those, um, waffle cones?

“C’mon I’m the president, don’t I get free sprinkles?”

The sucker bows down to everyone.

“Uh… would you mind if someone built a Mosque next door?”

The Thursday Contest has already got things under wraps.