The Your Pad Or Mine Edition OTB Caption ContestTM is now over.

The Your Pad Or Mine Edition OTB Caption ContestTM is now over. 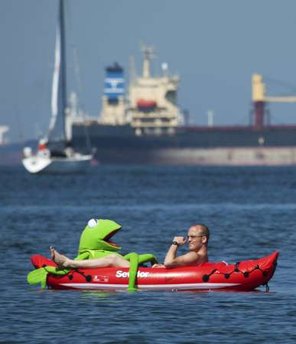 First: Cowboy Blob – Chuck was just about ready to make his “Rainbow Connection.”

Third: Scarlet Pumpernickel – Kermit: “Well we got out alive, but I think the chemical dispersant is going to have some side effects, Piggy.”

charles austin – You know what they say about frogs with big hands, don’t you?

Maggie Mama – Kermit: “I’m headed for the Smithsonian. Where are you going?”

G.A.Phillips – Damn dude, when you said you was going green I thought you meant like Al Gore.

D. Dean – Sixteen hours prior to Bob breaking out in full body warts.

No I don’t think the walrus knows you haz his bukkit.

The Monday Contest has already kicked its balloon tires.