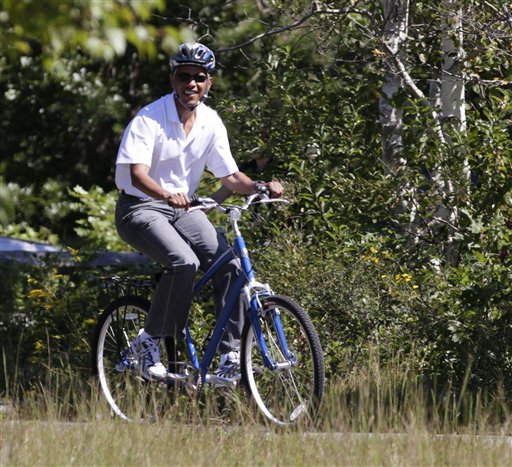 Second: Michael Hamm – Obama takes his Green Energy initiative on the road. So far, one job saved or created.

Third: FormerHostage – Conclusive proof that BS is a renewable source of energy!

Robert W. armijo – “We’re out of the woods and back on the right track!”

floyd – I ride my bike, I roller skate, don’t drive no car, don’t go too fast, but I go way too far…

coco konski – michelle said i couldn’t ride a two wheeler but YES I CAN!

G.A.Phillips – Nice helmet…..it’s gonna be funny as hell when he wipes out and one of his ears cuts down a tree…

Maggie Mama – As usual the President is spinning his wheels.

Apparently, all the men’s bikes were taken.

There is still no basement in the Alamo.

The Gods must be Crazy III – Who else would drop a bike into Kenya.

The Thursday Contest is in a hole and digging faster.