The Do The Hustle Edition OTB Caption ContestTM is now over.

The Do The Hustle Edition OTB Caption ContestTM is now over. 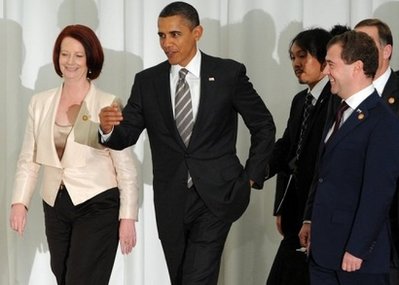 Second: Maggie Mama – Obama signals his teleprompter to move in a little closer.

Third: Robert W. Armijo – “Say, I got to hand it to Sarah Palin. This ‘writing on the hand trick’ really works.”

charles austin – So is he running for president or running from the presidency?

regularron – Mr. trouble never hangs around, when he hears this Mighty sound, Here I come to save the day!

Joe DeVito – Those Kenyans runners have such excellent form

Dancing with the Czars.

The Thursday Contest is already in a tryptophan induced coma.