The All Problems Look Like Nails Edition OTB Caption ContestTM is now over.

The All Problems Look Like Nails Edition OTB Caption ContestTM is now over. 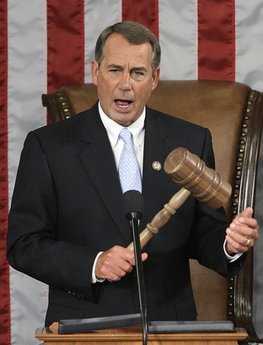 Second: JazzShaw – “And Pelosi… your new pledge name will be… Flounder!”

Third: anjin-san – Equipped with a smokescreen gavel after a visit to Q, Agent Orange is ready for his next mission…

Maggie Mama – I may walk softly but I carry a big f-in stick.

Robert W. Armijo – “I came here to chew bubble gum and kick ass…and I’m all out of bubble gum.”

MstrB – At least he isn’t crying.

JKB – New Speaker of the House vows to drive a wedge between the House and the American wallet.

Now all I need are Reid’s Spear and Magic Helmet.

The Monday Contest is seeking God.exe.