The Hope and Chain Edition OTB Caption ContestTM is now over.

The Hope and Chain Edition OTB Caption ContestTM is now over. 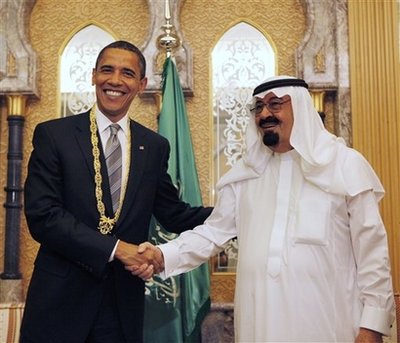 First: G.A.Phillips – All we need now is the bracelet of Anubis…

Third: anjin-san – Obama had already clearly stated “No, there won’t be any kissing”.

Maggie Mama – King Abdullah gave me this necklace so I could wear the Peace Prize to work.

JazzShaw – Say, you guys don’t have any pandas, do you?

mpw280 – It was Michelle’s belt but it got to small, so I am using it as a necklace now.

THE TOO CLOSE TO THE TRUTH AWARD

anjin-san – Saudi Arabia awards its Medal of Honor to President Barack Obama for taking down the Iranian nuclear program without killing anyone.

Golden Rule: The one with the gold makes the rules.

The Monday Contest is please to meet Hu.