The Devil’s In The House Edition OTB Caption ContestTM is now over. 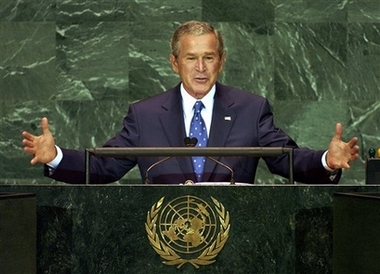 First: bRight & Early – I hope you have nightmares every time you see a mustache this big.

Second: Hodink – “I admired Ann Richards. She had a sense of humor about yea big. Just ask my dad about his silver foot.”

Third: FormerHostage – Y’all ever seen Cheney in the shower?

Michael Demmons – You think she’s a little chunky now? You should have seen her ass when I met her!

Suzanne Berton – I caught a terrorist and it was this big!

Bithead – I have a question for the President of Iraq Iran. Do the words “Molten Glass” mean anything to ya? (update — I knew what you meant – Rodney )

Rachel Edith – “Not me this time. Frankly, it was nice to see the Pope in a hell of a lot of trouble for a change.”

Lasting Magic – “Ever since we got married, my wife has tried to change me. She got me to stop drinking, smoking, running around at all hours of the night and more. She taught me how to dress well, enjoy the fine arts, gourmet cooking, classical music and how to invest in the stock market. I am improved by this much. You’d think I’d be bitter because she spent so much time trying to change me. Nope, I’m not bitter. Now that I’m so improved, she just isn’t good enough for me.”

Mahmoud: (out of frame) “No no Mr. President, ‘How big an ass do you think I am?’ is only a rhetorical question.”