The Abbie Normal Edition OTB Caption ContestTM is now over. 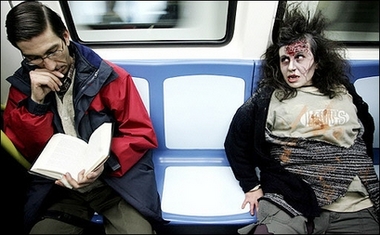 An Excellent contest with many great captions, some are honored below

Second: FormerHostage – The Snickers commercial that didn’t even MAKE the cut.

Third: Mark – Did I mention I used to be an astronaut? Hello? Look at me dammit!

yetanotherjohn – Just my luck, I get stuck sitting next to the weirdo reading the book.

John Burgess – Don’t you recognize me? I was once the NetRoots administrator for John Edwards…

DaveD – Nancy was so busy in her new position as House Speaker that she inadvertantly let her regular botox treatment schedule slide.

charles austin – “Hey buddy, can you spare an obolus for Charon’s fare?”

::cue Odd Couple music::
Narrator:
On November 13th, Felix was asked to remove himself from his place of residence. That request came from his wife. Deep down, he knew she was right, but he also knew that someday he would offer her up as a sacrifice to the Prince of Darkness. With nowhere else to go, he arrived at the grave site of his childhood friend, Dolly Madison, and raised her from the dead. Sometime years ago, Dolly had been killed by her parents and buried, with pennies on her eyes. Can a divorced man and a recently created undead minion of Satan share an apartment without eating each others’ brains or sewing salt into each others’ mouths?

Monday Contest has already sold a gross of snake oil.