The Kemosabe Edition OTB Caption ContestTM is now over. 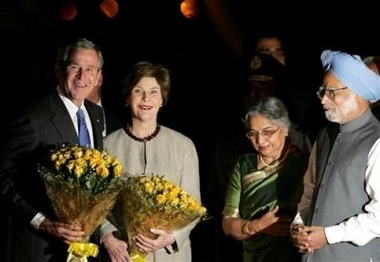 First: FreakyBoy – President Bush then gave a short speech where he apologized for the massacre at Wounded Knee and how he had always been a big fan of Jim Thorpe.

Patrick T. McGuire – Somehow, the thought of cowboys and indians will never be the same again.

T. Harris – “Heh-heh, I think I’ll get me one of those cool-lookin’ light blue turbans and REALLY freak out the Dubai port deal opposers!”

radio free fred – “The Roses are nice, but I was hoping for Poppies.”

“I hear y’all have a New Delhi, I’d just love some thin sliced ham and beef.”

“Condi said I couldn’t call ya ‘raghead’ for a nickname, so I’ll call ya ‘sheethead’ instead, sounds something like my mama used ta call me, if ya know what I mean. Sort of grows on ya”

The Monday contest is already Tub-Thumping.

first OTB Caption Hollywood will have you climbing the walls