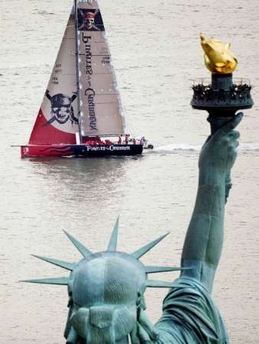 First: Moe Lane – You must be this tall to sack NYC.

Second: yetanotherjohn – The pirates sailing parade in support of their right for an amnesty on illegal immigration, raping, pillaging and burning was lightly attended.

Third: Maggie – The Homeland Security Agency has announced that New York has a major problem with its early warning system. Apparently Miss Liberty cannot send out an alert for “two if by sea.”

Rachel Edith – Sorry, this entrance is closed. Have you tried Florida? Or perhaps along the Mexican border?

Ingress – “Give me your tired, your poor, your weird …”

charles austin – After the Immigration Reform Act of 2006, this year’s four legally allowed immigrants came in together on a catamaran.

Bithead – Ace moves in for the attack.

Upon stealing the flame of the statue of Liberty Captain Jack Sparrow suffers the ‘Curse of America.’
– People not on the crew continuously try to board the Black Pearl
– The French say they’re your friend, but then openly despise you.
– People think you lie and steal like a pirate (Well for Captain Jack, that wasn’t so bad)
– Others feel ‘entitled’ to your gold.
– Everyone on the crew thinks the rules are only guidelines.

Give me your tired, your poor,
Your huddled masses yearning to breathe free,
The wretched refuse of your teeming shore.
Send these, the homeless, tempest-tossed, to me:
I lift my lamp beside the golden door.
— The Code is more what you’d call “guidelines” than actual rules.

The Monday contest is already sizing things up.

Other Contests running this week
Riding Sun is not that happy with W.