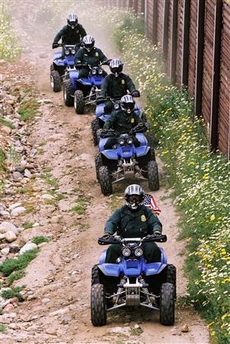 First: spacemonkey – I’ll bet they tear down that wall when they build the fence.

Second: Hodink – Volunteering for duty were Presidents Bush, Bush, and Clinton and Vice Presidents Gore and Cheney. The only thing everybody could agree on was that Cheney should be in front.

Third: the Pirate – Sure beats riding a lawnmower.

Bithead – The border??? Hell, I thought this was the outside of a Nudist camp we were patrolling…

radio free fred – Six Thousand National Guard Troops on Our Southern Border May Have Been An Exaggeration.

Eric J – This summer from Disney, only on DVD: Snow White II: the Seven XTreme Dwarfs.

McCain – In a show of strength against U.S. arrogance, Vicente Fox orders a Mexcian tank battalion to the border.

McGehee – The daily commute in L.A. has changed dramatically since gas hit $12 a gallon.

We got them from Alamo Rental, Of Course.

Implications that it was the Duke Motocross, not lacrosse, team only served to further obscure the facts of the investigation.

The Monday contest has already been incarcerated.

Other Contests running this week
Riding Sun is having a bird.