The That’s Not the Longest Yard Edition OTB Caption ContestTM is now over. 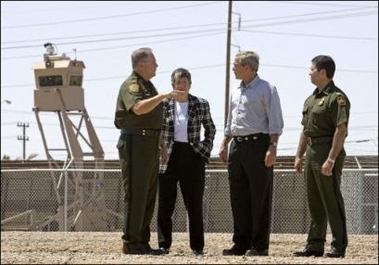 Second: Hermoine – “This here’s a boring border, Sir. We mostly watch American Idol, look at girlie magazines and practice our shooting for when Cheney visits.”

Third: spacemonkey – Officer: President bush, this is Juan, he came to America to do the job Americans want you to do. Namely, seal the border.

Gollum – I eat breakfast 300 yards from men who are trained to kill me, so don’t think for one second that you can come down here, flash the Seal of the President of the United States of America, and make me nervous.

Hodink – “You take a right at the organ pipe cactus, go back there a bit and everybody just goes on the barrel cactus.”

Donald Sensing – “Well, actually, Mr. President, they can hide real good ’cause most of ’em is only about this tall.”

DaveD- “And where you’re standing, Mr. President, is where we’ll be putting up the sign that says ‘Back Of The Line Starts Here'”.

Maniakes – “What we have here is a failure to communicate.”

As I went walking I saw a sign there
And on the sign it said “No Trespassing.”
But on the other side it didn’t say nothing,
That side was made for you and me. — (Woody Guthrie)

I eat breakfast 300 yards from men who are trained to do my job for a tenth of what I make, so don’t think for one second that you can come down here, flash the Seal of the President of the United States of America, and make me nervous. (Inspired by Gollum)

This land ain’t your land, this land is my land
I’ve got a shotgun, and you ain’t got one
I’ll blow your head off if you don’t get off
This land is private property; — (not credited)

“Say… how many hard boiled eggs you think you can eat?”

Another Gone Hollywood Caption Contest is in a squeeze as well