The Penguins is Practically Chickens Edition OTB Caption ContestTM is now over. 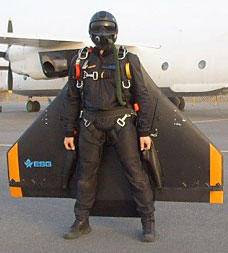 Apparently everyone had something funny to say about this one. One of the best all around contests in recent weeks as far as the considerable amount of excellent captions.

First: Gollum – The lieutenant was stoked until he found out about the “aerial refueling” maneuver.

Second: John Burgess – Sir, the equipment is great, Sir! But we really need to rethink the “Flying Squirrel” unit designation.

Third(tie): Hermoine – Hi-tech aeronautics. Low-tech weaponry. “We glide 120 miles or more before landing. Along the way we piss on ’em.”

DaveD – After attaching the end of the ball of string he told Johnny, Jr. to run away from him really, really fast.

McGehee – “I find you lack of faith — and your high-pitched giggles — disturbing.”

Darklock – Does this make me look fat?

SgtFluffy – Playing it safe this time, Major Tom readies for his next flight

Ingress – “It is ok. But frankly, I was hoping for one of those small Hummers.”

Alan Kellog – You want to put what on the bottom of my feet?

Darkside – Pilots found it much easier to sneak up on enemy aircraft in their new camouflage suits.

Music Fest Award (For trying to post every flight related song reference, …a few below)

charles austin –
“They fly through the air with the greatest of ease, those daring young men with their flying machines.”

“Sky pilot, how high can you fly?”

“Light the fuse? What fuse?”

“A carrier landing is not advised Mr. President.”

“Dick Cheney was able to get from his undisclosed bunker location to the White House in a matter of minutes.”

In the end, the Chinese Space program only received moderate funding.

As the borders tightened, illegal immigrant’s resorted to more devious methods of entry.

Wile E. Coyote couldn’t wait to try out the latest offering from ACME on the Roadrunner.

“Dang, too much starch in the shorts again.”

The Monday contest is already keeping an eye out for you.