The Rocket to me, Baby Edition OTB Caption ContestTM is now over. 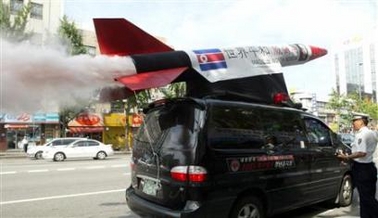 For being a slightly smaller contest than in recent weeks, this one yielded a lot of good puns, and for the first time in a while a tie for first. Congrats to

First(tie): yetanotherjohn – North Korea’s efforts to avoid US anti-missile intercepts were dealt a blow when the driver was stopped at a sobriety checkpoint.

First(tie): McCain – The Cataclysmic Converter is a popular option for the value-conscious Jihadist.

Second: Gollum – Sorry officer, I guess I had the cruise missile control set a little too high.

yetanotherjohn – Excuse me Mrs. Von Braun, you might want to have your husband have the emissions checked on your van.

yetanotherjohn – Pulling the suspected terrorists over for an investigation wasn’t exactly rocket science.

DaveD – In an embarrassing oversight, the budget for the South Korean Mobile Defensive Missile Program failed to allot enough funds for change for parking meters.

Bithead – The terrorist weapon was impounded for Violations of EPA law.

Eric J – North Korean missile technology was not as advanced as they had led us to believe.

“The yield… uh I mean the mileage is…”

I don’t care if you are trying to do the Kessel run in 12 parsecs, you still need to stop for red lights.

Rodney is packed for vacation and rarin’ to go. Nothing more to see here, move along.

There will be no OTB Caption Contest or Caption Jam for a few weeks so remember to visit some of the other great contest sites from the last Caption Jam.