The Just for the Halibut Edition OTB Caption ContestTM is now over. 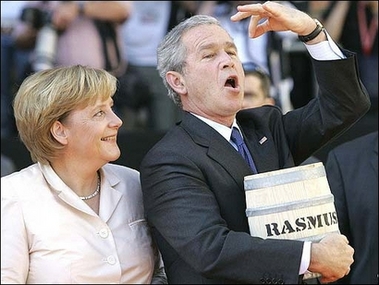 First: charles austin – One must be careful about spoonerisms when discussing German herring.

Second: Maggie – When Merkel expressed concern that the President might choke, Bush demonstrated his new method for downing pretzels.

Third: radio free fred – “I Give These To Dick Cheney, He Likes Shooting Fish In A Barrel.”

yetanotherjohn – Peeeuuuu. I’m going to need a lot of NYT to get these home to Laura.

Meezy – Eww, it’s one of your pubic hairs, honey!

In response to the price per barrel of oil Dubya Responds, “Let them eat fish oil.”

“Reminds me of when Ma Bush would wash out my mouth with Rasmussen Lye Soap for sayin’ SH#T.”

“Thanks for the Snus.”