The Nucular Finger Edition OTB Caption ContestTM is now over. 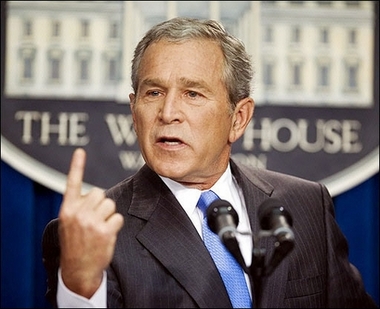 First: Gollum – And the second good reason I have for invading Iran is . . .

Second: yetanotherjohn – The president articulated the number of times the MSM have been helpful in the war on terror.

Third: Charlie Summers – At a press conference today, the President emphatically notes the number of planets remaining after the recent cutbacks.

Ingress – “You heard me use the ‘S’ word with Tony that one time. One sh*ttin’ time!”

Elmo – The President reveals the results of the latest international study, to quantify the true number of moderate Muslims.

LorgSkyegon – I’d like to wish Bill Clinton a happy 60th birthday. I’d also like to warn him about his next physical.

The Pirate – In an attempt to satisfy the White House Press Corps, President Bush provides every detail from his last physical.

All your finger are belong to us

Do Not Taunt Happy Fun Finger

“Mr. President. How many times have you been shot by Dick Cheney?”