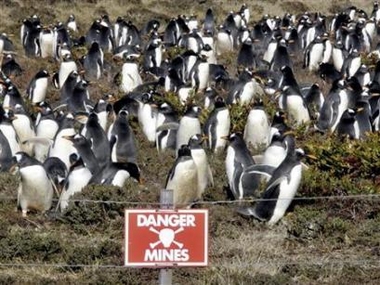 First: charles austin – What’s black and white and (soon to be) red all over?

Second: FreakyBoy – “Launch of the Penguins”

The Man – The UNs new way of disposing of mines really irked PETA.

GOP and College – HOT WINGS! GET YOUR HOT WINGS HERE!

Mythilt – The only thing protecting us from a massed penguin attack across the DMZ is our use of mines.

FreakyBoy – “Guys, guys, I know it sounds impossible, but I swear this is the last place I saw Elmo before he was able to fly.”

“…and now Edgar is gone! What are we going to do?” (apologies to the Farside)

Wasn’t Al Gore last seen at OTB in a Tuxedo?

“What’s that on the Telly?”