The Duck Dodgers In The 24th-and-a-half Century Edition OTB Caption ContestTM is now over. 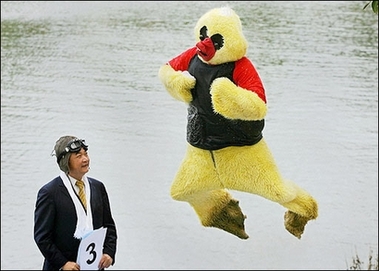 First: radio free fred – “Don’t Worry Mr. Rumsfeld, You Have 30 Days To Qualify For This Job.”

Second: Anderson – Tamiyoshi could fly the old-fashioned way, in an airplane … but his Western technology was nothing compared to the powers of DUCK FU.

The Man– Due to regulations following World War 2, Japanese Air Shows leave a lot to be desired.

yetanotherjohn – Dr. Phil explains why ‘showing the real you’ on dating videos may not lead to more dates.

DaveD – A jump into the cold lake would surely help his duck costume fit better. (I think thats a knee, but maybe you meant something else — Rodney)

Kucinich Announces his candidacy for the 2008 Presidential Race.

The landing had to be discounted to a score of three, as the pilot landed Chinese style – Won Wing Lo.

Everyone Knows That The

Thursday contest is already avoiding any appearance of Scandal.