The Heavens to Murtha-troyd Edition OTB Caption ContestTM is now over. 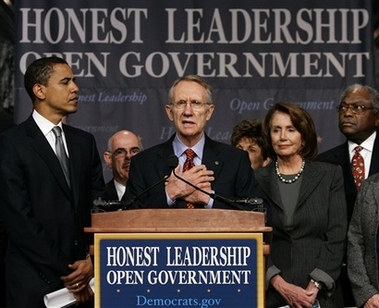 First: SgtFluffy – Cross our hearts, We know you’ll cry, when we raise your taxes oh so high

Third: Venomous Kate – “I swear I did not have relations with Nancy Pelosi…”

The Man– Honest Government. Just disregard the wads of cash in the freezer.

yetanotherjohn – In my heart of hearts, I thought those people trying to give me money were just real friendly.

Ingress – “I’m scary Harry. Gettin’ this off my chest.
I’ve done nothin’ illegal. Hell, I did my best.
And the money I got. Sure, it helped a lot.
Cough, mumble, cough. Thanks, Abramoff.”

“And I sincerely want to extend an olive branch to the Republicans by endorsing President Bush’s pardoning of Abramoff.”

Harry Reid suddenly realizes he’s been given the ‘Red-Tie-O-Death’ to wear, from Speaker Pelosi.

Anderson Gets a Two-Fer
Right Linx has the same pajamas as they do,
but Riding Sun has the ultimate pajama party.