The Relatively Speaking Edition OTB Caption ContestTM is now over. 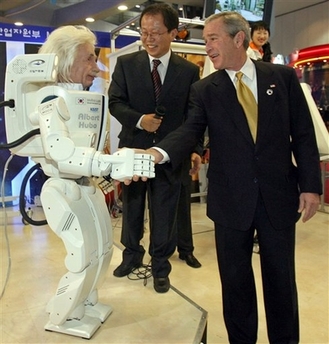 First: Hermoine – “Hey watch it there Einey, that felt like the same weird hand signal I used to get from Foley.”

Third: Gaijin Biker – “Why do you have me shaking hands with this thing?”
“Well, he is the President of the United States.”

Gollum – Heh, heh. That little dance you do reminds me of another Al.

Ingress – “Hey Egghead. Iraqi war. Any new bombs I can use?”

“So you’re in the real-itivity market? Say uh… you din’t sell any property to that Cindy Sheehan didya?”

“Say… ya any good with numbers? Rovies kinda lost it.”

“You might even be President one day little feller, after all, one of your kind became Governor of California.”

Thursday contest is already ordering another round.

Bush: Leaving Iraq Would Be a Terrible Signal