The Beware of Greeks Bearing Gifts Edition OTB Caption ContestTM is now over. 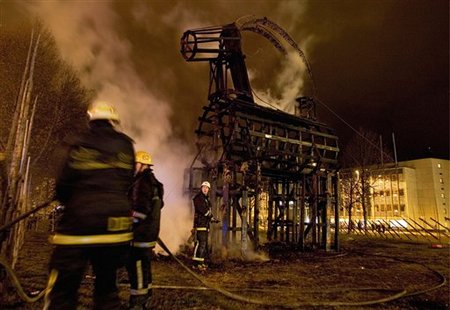 First: Don McArthur – Police today announced the arrest of Adam and Jamie of the Discovery Channel’s Mythbusters, charging them with involuntary manslaughter in the deaths of nine Greek immigrants.

Third: Gollum – Perhaps if we built a large wooden badger . . .

yetanotherjohn – Is it just me or did I miss the part in the Bible about the Christmas goat made of straw.

Hermoine – “All very funny, Tommy. Next time, build one without a flatulence issue.”

madmatt – Then this big metal cage was supposed to slam down and catch the mouse…I don’t know what went wrong?

charle austin – The rookie was immediately accepted into the firefighting brotherhood when he told the others to put away their hoses — that he would put this one out by himself.

elliot – These must be the ‘Wise Men’, cause in the Bible it says …’and the Wise Men came from a fire.’

Teddy’s attempt to replace Oldsmobiles with alternate forms of transportation were equally disasterous.

Riding Sun has the flopinator.