The Santa Cowabunga! Edition OTB Caption ContestTM is now over. 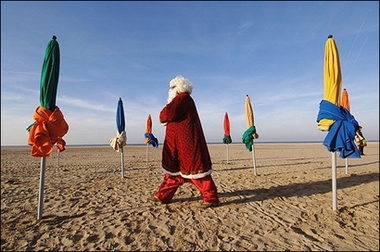 Second: maniakes – Curse Ann Coulter for converting all the Iraqi children to Christianity! How can I be jolly when I’m wearing a fur suit in 110 degree weather?

Third: Timmer – The moment before we learn under all those layers, wig and fake beard…Santa is a guy who shouldn’t wear a thong.

Gollum – Santa heads back, concluding that the topless area of the elf beach isn’t really such a hoot.

charles austin – I am the walrus.

Lionel – Next year, I replace Rudolph with a GPS device!

McGehee – After the freak North Pole sandstorm, Santa was pleased to see that his Reindeer Emergency Location System was working perfectly.
Now if only he could find some elves to dig them out…

“So this is Pismo Beach!”

After the Christmas of 2006, Al Gore only ever got coal for Christmas.