The Song of the Mouth Edition OTB Caption ContestTM is now over. 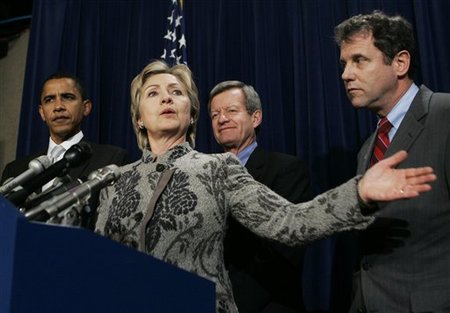 An Excellent contest with many great captions, some are honored below

First: Hodink – “Wait. I do have another announcement. It should surprise absolutely nobody that Bill Clinton could be Dannielynn Smith’s father.”

Second: charles austin – “Things took a turn towards the ugly as the DNC presidential nomination contest entered the talent phase.”

Third: DaveD – Hillary was convinced that if she didn’t look at him he really wasn’t there.

Sgt Fluffy – Sen Brown thinking: … hmmm … I have a rug like that in my bathroom…

DRUDGEBREAKING: The case of the mysterious disappearance of Whitehouse curtains following the Clinton Administration has been solved. developing…

“uh wazzat … you’re singing a song with which I am not familar.”
“It’s the Star Spangled Banner.”

“…and of course, Bill will be the man in charge when I am President.”

What another freakin’ zombie picture?