The Year of the Pig Edition OTB Caption ContestTM is now over. 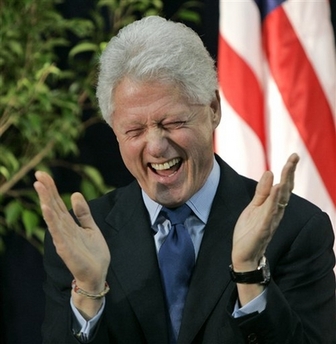 yetanotherjohn – Is that a white spot on the blue tie?

Caliban Darlock – I do believe in fairies! I do, I do, I do!

Mike – She thinks she can win!

Gollum – We were talking about her numbers and she said, “Well, maybe I’LL go on Arsenio and play some kind of instrument,” and I said, “Yeah, baby, how about a skin flute?” and she’s like, “That’s a good idea, is it hard to play one?” and I’m laughing my f#%$* a#$ off and she says, “What, you mean Arsenio isn’t on anymore?”

DaveD – Bill is beside himself after winning his first OTB Caption Contest.

Ken Starr – And then Monica says, “Damn, Mr. President, look what you’ve done to my dress!” So I say, “Hey, I’ll pay for the dry cleaning.” And Monica says, “Oh, no! I’ll never have this dress cleaned now! It’s too very special!” And I say, “Yeah, you’re right – who’s gonna know?”

Bill, upon finding that as First Man he’ll have hiring authority for his own intern staff.

So just how does Hillary look with the new Britney-Do?