The Dubya On Board Edition OTB Caption ContestTM is now over. 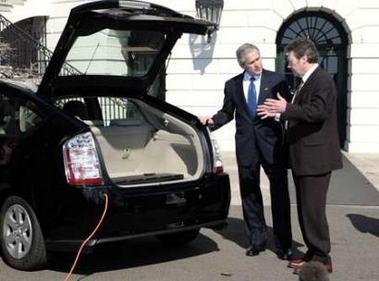 First: stillearly – Wow, you could fit 5 Scooter Libbys in this trunk!

Second: McGehee – “And, Mr. President, this baby can go this far without recharging!”

Third: elliot – Well no, that’s not a trunk. It holds the 400 miles of extension cord…

Maggie – No, Mr. President. Al Gore’s body won’t fit in the truck. After he won the Oscar, his head is about this big.

yetanotherjohn – Now I know a lot of democrat party people think I’m not to smart, but even I can see the problem with this here electric car.

Anderson – “Mr. President, your invention is … very, um, creative … but have you considered an electric car that runs on batteries?”

LJD – Are you gonna git in the trunk, or does the Secret Service have to help you?

Stormy Dragon – I don’t care how big the built-in TV is, when I proposed a $1.2 billion electric car initiative, I didn’t mean to spend it on just ONE.

Lionel – “Did I hear you right, I can use Dick Cheney’s pace maker to jump start this thing?”

“So now the power is switched on right… I don’t want a repeat of that Segway incident.”

“So you can tell it’s a Republican by its trunk, ha… very funny sir.”

Vieau: “…and it comes with a defib packaged made especially for Dick Cheney.”
Bush: “From what Senator Obama says, Senator Clinton could use a de-fibber too.”

“Well when Al Gore said he wouldn’t be caught dead in it, it was just as figure of speech sir.”

Thursday Contest is already being a big tease.