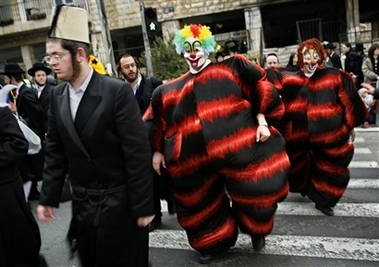 First: yetanotherjohn – I’m telling you Aaron, something isn’t kosher about those two.

Second: McGehee – After their case was laughed out of court, the plaintiffs in Fat Clowns v. Coulter vow to continue their fight against unkind language.

Third: charles austin – We’re not really mohels, but we did a birthday party at a Holiday Inn in Crown Heights last night.

Bithead – With the addition of these two, Al Gore is no longer two clowns short of a circus.

Bithead – Now where did we park the car?

markm – Two members of Insane Clown Posse (I.C.P)converted this week. Asked why, they answered, “We wanted to be in Adam Sandlers ‘Thanksgiving’ song.”

FormerHostage – Embarrassing clown moment #14: two clowns showing up at a party in the same outfit.

Terrence – The Bar Mitzvah became uncomfortable when the clowns were invited to read from the Torah.

The demise of Captain America lead to some rather disturbing superheroes, including Moyhel Man and Puffo the flatuent clown (with sidekick).

“…if I could walk that way I wouldn’t need Talcum powder.”

Monday Contest has yet another clown picture.