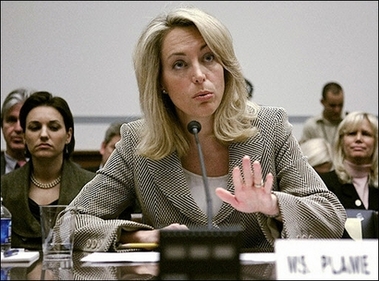 First: charles austin – “I could tell you sir, but then I’d have to kill you.”

Second: Dennis – Excuse me Congressman… I only remember lying 5 times

Third: Gollum – Dark-haired girl on the left: “Hmph. I guess her thong’s been ‘outed’ too.”

bRight & Early – Photographer Mannie Garcia captures Valarie Plame with her mouth shut; a rare moment when she wasn’t lying to the committee.

charles austin – “Yes sir, I was an analyst at the CIA. Oh, and the first letter in the word ‘analyst’ is pronounced as a short vowel.”

Anderson – “Hold on, Senator — I don’t even know anyone by the name of ‘Bithead.'”

Scott_T – Yes I am Time Person of the Year! (slaps hand on the table)

yetanotherjohn – Wait right there, I am legally blond and I have the inconsistent story to prove it.

Lasting Magic – I’m a dame who is Valerie Plame.
And I blame Cheney… and what’s his name.
The whole thing is lame.
I can’t win this game.
I know how to aim and flame.

I’d like, Weasels don’t get sucked into Jet engines for $1000 Alex.

“I’ll tell the truth, but only if Jennifer Aniston get’s to play me in the Hollywood Mocumentary”

“I’m telling the truth… as far as you know.”

“What I’ve really come to talk about today is shoes.”

“I know that you believe you understand what you think I said, but I’m not sure you realize that what you heard is not what I meant.” — Robert McCloskey

Thursday Contest has already caught on to Murtha’s plan to win.