The Funky Tut Edition OTB Caption ContestTM is now over. 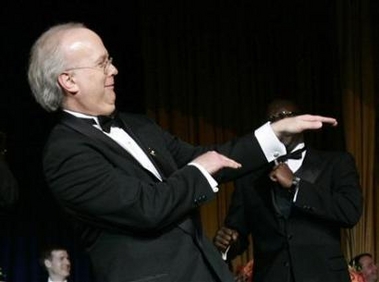 First: Hermoine – His magical incantation produced a little head, which was exactly what he had asked for, only, well …

Second: charles austin – “These aren’t the indictments you’re looking for.”

physics geek – “Observe: at no time do the fingers ever leave the hand.”

Gollum – Rove: “No, seriously, it’s funnier when I’m wearing a grass skirt and a coconut bra.”

yetanotherjohn – Despite blatant pandering to the judges, Karl Rove failed to make Out magazine’s list of the 50 most powerful gay men and women of America.

Steven L. – SLEEP! SLEEP! When you awaken, you will vote REpublican and remember nothing of this. and you will cluck like a chicken.

As Rove made the rabbit appear, Jimmy Carter disappeared.

AFter the passing of Elwood, The Blues Brothers was no longer the crowd pleaser it had once been.