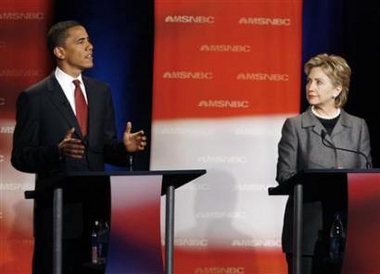 First: Su Berton – I have a Dream!

Second: CowBoy Blob – “Once you go Barack, you never go back!”

charles austin – “Missed it by that much.”

physics geek – “So Senator Clinton, was the cigar this big?”

The ‘She Said, He Said’ Award Winner

tammy swofford
Her: I wonder if he has noticed that I look like Jackie Kennedy with these pearls?
Him: I wonder if she realizes she looks like Eleanor Roosevelt in that suit

“Rather taken with the Enumclaw movie, at Cannes, weren’t we Obama?”

“Yes Obama, I have a bigger prick… Bill is Six-foot-two”

Next on Mythbusters, Jamie and Adam try to put an end to the old myth….