The Pimp My Grill Edition OTB Caption ContestTM is now over. 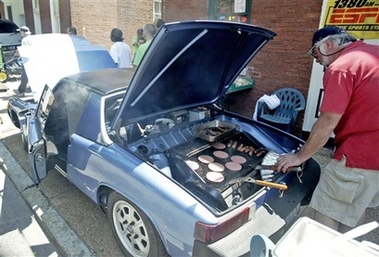 Hermoine – “Pimp My Ride was closed.”

charles austin – “Come on over Al, I’ve got the burgers and beer, you bring the carbon offsets.”

Brian – TRUST ME – don’t ask where the meat came from.

“Al’s just out cookin’ on the back Porsche.”

Baby Back Ribs can only be done well on the ’78 Eldorado model.

“It got 50 Miles to the Scallion ’til the Motor City car companies shut me down.”