The At Least We’ll Always Have Paris Edition OTB Caption ContestTM is now over. 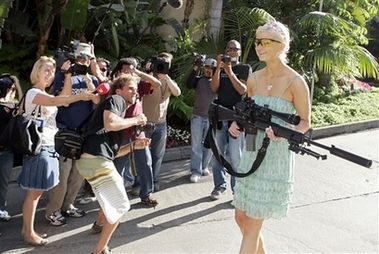 First: charles austin – “You can have my rifle when you pry it from my cold, dead, … ouchee, I broke a nail!”

Cowboy Blob – The Range is Haawt!

William d’Inger – Now there’s a gal who knows how to date Phil Spector.

“I’m for gun control, I use both hands.”

Jake Blues would not get away this time.

Everyone thought it good that Paris had found God, until it was revealed the God she had found was Allah.