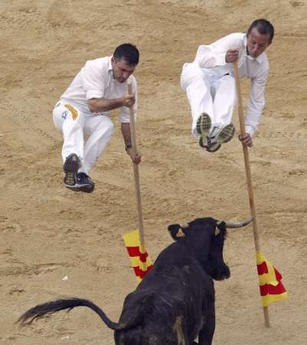 Third: Maniakes – In inland regions, “jumping the shark” is impractical.

Hodink – “Try this! It wards off the bull in a political election.”

elliot – All was going as rehearsed, until Julio heard a ‘snap’…..

yetanotherjohn – The problem for Al running is the extent people will go to avoid the possibility of a Gore.

“I don’t have to balance here forever, Gomez, just longer than you.”

Juan small jump for a man, Juan Giant Leap to save his ass.