The Dumbledork Edition OTB Caption ContestTM is now over. 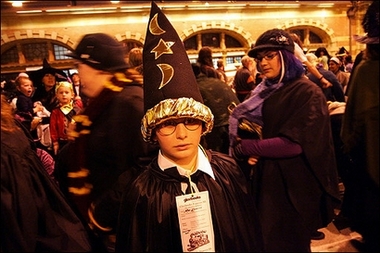 Second: Scott_T – Obama’s liberal views are exposed to all when he says, “That boy needs some ‘appropriate’ sexual education.”

Bithead – What type of magic, an I in? I’m in computer support!

Timmer – Mom told me this may be the best day of my life. — I think I want to kill myself.

“Eanie meanie, Chili Beanie, The Pundits are about to speak.”

While he had shown some aptitude for Wizards’ Chess, Harry was uncertain why he’d been invited to the Wizards’ Darts Tournament.

“Hope he got his free bowl of soup.”