The All Your Lego’s Are Belong To Us Edition OTB Caption ContestTM is now over. 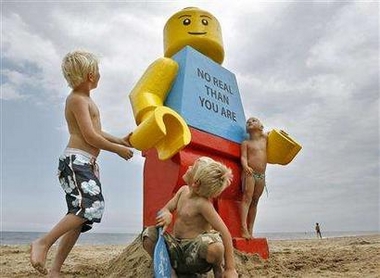 Second: Hodink – President Bush honored Karl Rove today. Nobody understood it but what else is new?

physics geek – In a surprising move, The Lord of the Rings trilogy was remade, with one of the main characters recast as a woman made of plastic blocks. Her name? Legolass.

Bithead – Perhaps if we were to build this large wooden badger…

The sign that started replacing ‘John 3:16’ at football games.

Al Gore finds a campaign manager that fits his style.

(on back) This message is brought to you by Kucinich 2008