The Do You Have Any Grey Poupon Edition OTB Caption ContestTM is now over. 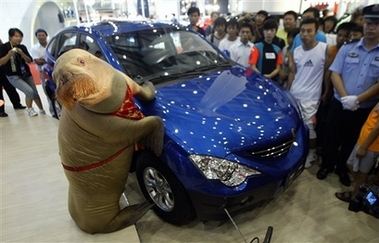 Phil Smith – “I’m telling you, the finish on this car is absolutely impenetrable. As you can see, it’s been sealed.”

Hermoine – “Greetings everyone. I’ve just come from the restroom where I enthusiastically engaged in inappropriate conduct.”

Bithead – Don’t the women all get prettier at closing time?

Stormy Dragon – The used car looked well cared for, but it later turned out to have a defective seal.

Walter was awarded the car. but was later arrested for transporting illegal levels of fish in a mercury

A big fish aficionado was only bidder on the former Paris Hilton car.